1947, Edmund Tolleson follows Father McMurtry home to his monastery. Father McMurtry stays home alone to masturbate while the other priests head out for a show. Edmund knocks on the door, claiming that his car broke down and that he needs a phone to call for a tow. Father Andrews, Coleman, Adeyemi, and Monsignor Sullivan return from the show. Father Adeyemi heads into the bathroom, where he finds Father McMurtry in the tub with his throat slit. Edmund comes out from behind the door and bashes Adeyemi’s face into the toilet seat repeatedly, leaving him unrecognizable. Edmund kills another priest before coming face-to-face with Monsignor Sullivan. Edmund reveals that sister Margaret McGuire was his mother, who Monsignor raped and impregnated, making Edmund his son. Edmund attacks Monsignor with a kitchen knife and stabs him while explaining that his mother ended up in a whore house, where someone shot her up with morphine and killed her. Because of this, he spent his childhood in an orphanage. Unbeknownst to Edmund, Father Andrews watches from under the bed.

Six months later, Mildred Ratched sits in her car at a gas stop watching as a young couple kissed in front of the store. The attendant hands her a map to Lucia and the newspaper detailing the vicious priest massacre and how the killer was being sent to Lucia State Hospital for psychiatric evaluation.

Mildred arrives at the Sealight Inn motel. She checks in with the owner, Louise, who takes her to her room. She’s received a lot of guests as of late as reporters are flocking in because there is a $5,000 reward for anyone who gets the first shot of the Clergy Killer. She warns Mildred about abusing the ice machine and that she doesn’t run a house of ill repute.

Mildred arrives at Lucia State Hospital claiming that she has an appointment with Dr. Hanover. She informs Dolly that she’s the new night shift nurse. Dolly goes looking for an actual nurse as she’s merely a trainee. As Mildred waits, she is greeted by Huck Finnigan, who tells her to have a nice day.

Head nurse Betsy Bucket recommends to patient Dario Salvatore that if he wants the board to seriously consider a furlough, he must continue with Dr. Hanover’s regimen and attend group therapy. Dolly interrupts and informs Nurse Bucket that she’s needed. Nurse Bucket then confronts Mildred with her alleged letter as it was neither written by herself nor Dr. Hanover. Still, Mildred wishes to wait for him to return so that she may speak to him.

Dr. Hanover awaits his appointment with Governor Wilburn. However, when the governor cancels his meeting, Dr. Hanover heads to a bar, where he notices a man, Charles Wainwright, watching him on the other end. By pure chance, Governor Wilburn and his secretary, Gwendolyn Briggs enter. Dr. Hanover tries to pitch for funding of his hospital, but Governor Wilburn isn’t interested.

The security guard, Harold, passes by the nurse’s station while making his rounds at the hospital. He compliments Dolly before staring down Mildred. Mildred then heads to the bathroom, where she hears a distant scream and clattering. She follows the noise a few rooms down to the vine room, where she finds Nurse Amelia Emerson having sex in the bathroom.

Nurse Bucket informs Dr. Hanover that there’s a woman who claims she has a job interview at the hospital. Dr. Hanover jumps to his feet and throws a flower pot to the ground in a fit of rage before going to confront Mildred as he never consented to an interview. Mildred is insistent, so Dr. Hanover brings her back to his office. After asking Nurse Bucket to leave, Mildred reveals that she was a nurse in the pacific theater during the war. She island-hopped with Admiral Nimitz’s boys from Tarawa, to Saipan, to Okinawa, where she became familiar with administering anesthetics, as well as dealing with a number of other tasks. They had a saying in the Corp: “Save one life, and you’re a hero. Save 100 lives… well, then you’re a nurse.” She then asks if he believes the human mind can be cured. He’s seen it with his own eye. Mildred has not, but it is all she wants. Although he admires her passion, he doesn’t have the resources to bring her on nor are there any openings.

As Nurse Buckets scolds Dolly and Amelia for not properly ironing the sheets and cleaning the bedpans, Mildred steals Amelia’s purse. She goes to Amelia’s house, where she finds Amelia’s husband and daughter on their way out. She claims that her name is Arlene Bauer and that she’s an old friend of Amelia’s.

Louise gets chills just from reading the articles about Edmund, though she is admittedly attracted to him. Mildred arrives and asks to be informed if anyone calls for Arlene Bauer. As she heads to her room, Mildred crosses paths with Charles. She tells him that a smile like his could melt ice and that she doesn’t like it. Some could say that he’s leering, she adds. He replies that he can’t help it.

Mildred slips a note under Charles’ door, asking if he’s married. He comes to her door and says that he is single. She reveals that this is her first time and asks him to sit on the other side of the bed. She would like to role play, but Charles isn’t entertained and leaves. He exits her room to find Louise outside the door. And She reveals that Arlene has a phone call.

Mildred meets with Amelia at a bar and blackmails her. She wants a job at the hospital and since there aren’t any available, she is forced to create one. And if Amelia doesn’t comply, Mildred will inform her husband that she cheated on him. Mildred gives Amelia a doll to give her daughter and tells her to leave town.

Dr. Hanover receives an unexpected visit from Gwendolyn, who offers to make his hospital the cornerstone of the governor’s re-election campaign. With the Lucia State Hospital and its results, they could force the public to see the governor as a leader.

Dr. Hanover informs Nurse Bucket of the offer he accepted from the governor. When Bucket reveals that they’re down two staff members, he decides to hire Mildred.

Nurse Bucket arranges a meeting with the staff and explains that it is imperative that they live up to the standards that attracted Governor Wilburn to them. She explains that unruly patients such as Dario, should be humanly tamed and tranquil.

While gathering the patients’ medication, Mildred grabs the blood pressure reducer. She slips the reducer into Father Murphy’s medication and hands it to Murphy while making her daily run with Dolly.

Governor Wilburn and Gwendolyn arrive at Lucia State Hospital. Dr. Hanover shows them the barn he is having constructed. Using all the latest advances in assisted therapy to calm even the most troubled minds. They ask about Edmund Tolleson, who Hanover reveals will be kept in the cellar beneath the hospital. Nurse Bucket interrupts and reveals that Father Murphy collapsed.

Nurse Bucket leads Dr. Hanover, Governor Wilburn, and Gwendolyn to the main room, where Mildred is tending to Father Murphy. She pats his back until he vomits and Dolly places a blanket over him. However, Nurse Bucket reveals to Dr. Hanover that someone gave Murphy the wrong medication.

Governor Wilburn takes a photo with Dario for the press. Mildred questions what’s wrong with him. Dolly reveals that Dario's brother just died. Not that it mattered. Dario wasn’t aware, but he wasn’t ever going to be released.

Governor Wilburn and Gwendolyn then arrange for Mildred to take a photo with the governor and Father Murphy, who is on his way to recovery.

Mildred relates to Dario losing his brother. She had a brother, who was the only family she ever knew. She remembers her mother and father but can’t picture them. She was taken away from them when she was young and never saw them again. All she had was her brother until he was taken away too. He needed her, and she was helpless to protect him. Mildred shows Dario mercy and informs him that he’s going to spend the rest of his life at Lucia State Hospital because his family doesn’t wish to see him. He deserves to be free from the pain he feels, so she takes him to Dr. Hanover’s office and reveals that there is a letter opener on his desk, which he uses to take his own life.

Dr. Hanover confronts Mildred after finding a broken seal on one of the blood pressure reducer bottles. Mildred maintains her innocence. They hear a thud and follow it to Hanover’s office, where they find Dario’s body on the floor. Dr. Hanover fears that his career is over. Mildred insists that she will take care of it while he goes to face the governor. Lastly, she tells him to inform the governor that she’s been offered a position at the hospital.

Governor Wilburn holds a press conference. He is a California native and was raised on the promise of the state. He promises that they will win together.

Nurse Bucket catches Mildred as she exits Hanover’s office and asks what she was doing there. Mildred claims that Dr. Hanover asked her to wash his towels. Nurse Bucket goes into his office to investigate but finds nothing out of the ordinary. Mildred then takes Dario’s body to the incinerator and disposes of any evidence.

After the press conference, Governor Wilburn asks Dr. Hanover to say goodbye to Nurse Ratched for him. While there ain’t a lot of meat on her bones, she hays there is choice, the governor remarks.

Edmund is brought to Lucia State Hospital for a psychiatric evaluation to determine if he’s well enough to stand trial. He is taken into the cellar beneath the hospital, where he receives a visit from his sister, Mildred. Tears run down her face as she comes into contact with her brother. Edmund fears that he will be sentenced to death. Mildred promises to find him a way out.

A Director's Cut of this episode was released on Netflix on September 18th, 2020 in the "Trailers and More" section of the Netflix page for Ratched. It features several extra minutes of extra dialogue not featured in the final published version, as well as the title sequence, which does not feature in the final version of the pilot (it debuted in S01E02: Ice Pick). 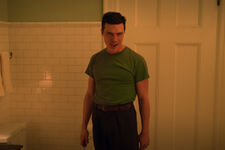 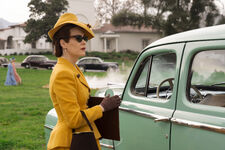 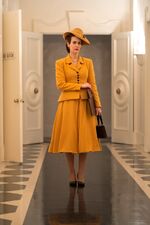 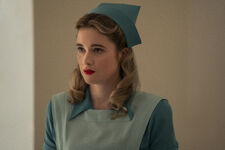 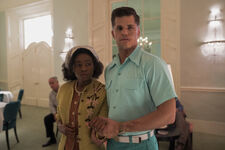 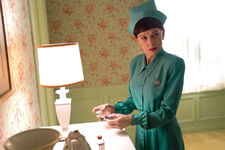 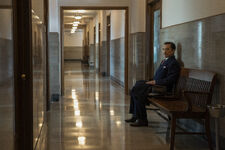 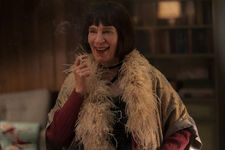 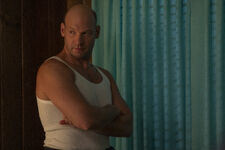 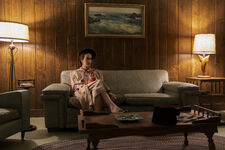 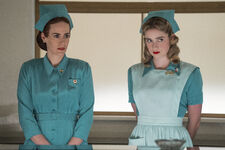 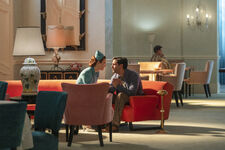 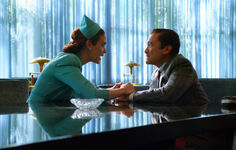 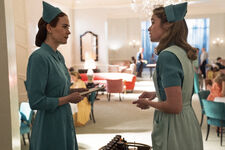 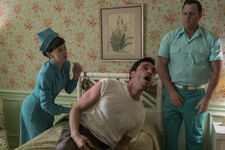 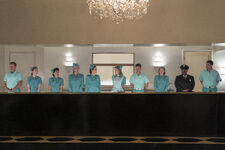 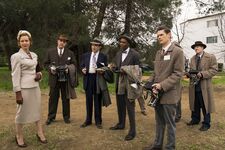 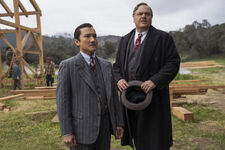 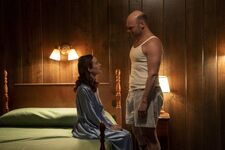 Retrieved from "https://ratched.fandom.com/wiki/S01E01:_Pilot?oldid=2869"
Community content is available under CC-BY-SA unless otherwise noted.